I decided to make homemade almond butter as a gift this past Christmas. I had never made it before but I wanted a relatively inexpensive gift for someone that did not want a lot of things cluttering her home. I ventured to YouTube and the technique seemed easy enough and I own an (okay) food processor.

For my first go-around I roasted a couple cups of almonds, tossed them in the food processor with a bit of coconut oil to help it along and processed it forever (20+ minutes) until it became a smooth butter.

Separated it into two bowls. In one bowl I added cocoa, vanilla, a tiny bit of maple syrup, and a little coffee. In the other bowl vanilla, maple syrup and cinnamon. I scooped them into clean mason jars. Sealed and put a bow on it. Beautiful.

The second time I decided to try using almond flour. Almond flour is just powdered (usually raw) almonds. I figured one, it would be easier because I’d already be halfway to a butter and two, it would be a little less expensive. It wasn’t by much but the bag of almond flour cost less than a bag of raw almonds. I did not do a cost analysis based on ounces of almonds but both batches filled my 2 small mason jars.

This second batch turned out great! I did not have to process it as long before it became smooth and creamy. 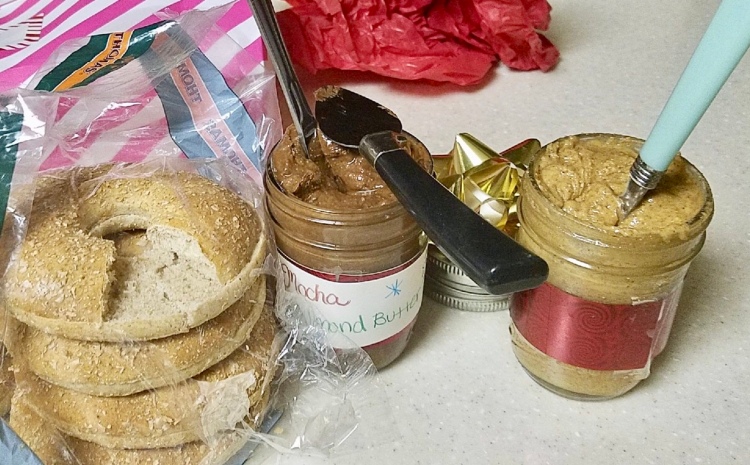 When I purchased the almond flour I also picked up a mixed nut flour (walnuts, almonds, coconuts). Once I’m finished with my almond butter I’ll try it out and let you know how it goes!

Coffee to taste (about a teaspoon)

Vanilla to taste (about a teaspoon)

The amount of nuts will depend on the size/power of your food processor. I also recommend using the add-ins to taste careful to add a little, mix well, add a little more. This is key because oil and water don’t mix! So be light on the water based add-ins (coffee, maple syrup, vanilla). Your butter will seize up if you add too much!

1. This step is optional. Preheat oven to 350. Spread almonds out in single layer on a baking sheet. Bake almonds for 10 minutes. Let cool.

2. In a food processor or high powered blender, process the almonds. Stop and scrape down the sides processor as needed or to give them a stir. Add a tablespoon or two of coconut oil to help it along if needed. Continue to blend for 10-15 minutes until butter is smooth or to the consistency that you like.

3. Separate into bowls. Mix in add-ins to taste. Remember light on the water based add-ins!

4. Store leftover almond butter in a glass jar in the refrigerator.

I hope this recipe helps inspire you to make a little creative homemade almond butter!

One thought on “Homemade Almond Butter”